Manpreet Toor, who has found success on YouTube and TikTok, reflects a new wave of Indian diaspora dance. 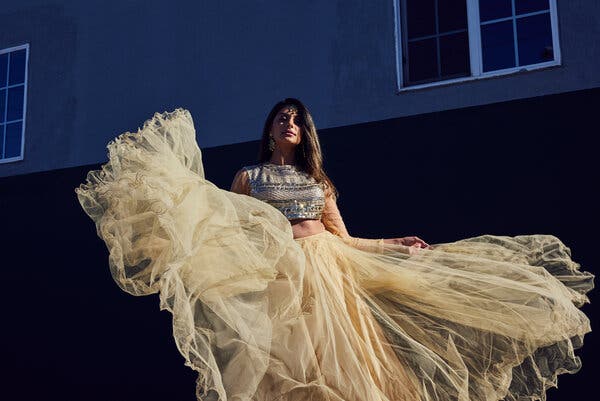 Growing up in California, Manpreet Toor remembers being exposed to bhangra — a lively Punjabi dance genre that is performed widely in the Indian diaspora — in her parents’ garage. “In Punjabi households, back in the day, we used to have parties in the garage all the time,” Toor said. She heard the sounds of music like the folk and pop artist Sardool Sikander, one of India’s most beloved singers, who died of Covid-19 in February.

In March, Toor, a leading figure in the Bay Area’s vibrant South Asian dance scene, and her fellow choreographer Preet Chahal paid tribute to Sikander. In a YouTube video with the look of a retro home movie, Chahal leads a group of men freestyling bhangra moves to a mash-up of Sikander’s music in a garage turned dance floor. Toor twirls into the scene wearing a festive lehenga (a dressy floor-length skirt), and rebuffs her male admirers with feigned irritation — a recurring motif in her choreography — before leading the female partygoers in dance.

“We wanted to bring back Sardool Sikander’s genre,” Toor said, and to evoke the joy of the garage parties of her parents’ generation.

Toor and Chahal’s video reflects a new wave of Indian diaspora dance, a wave that has been enabled by platforms like YouTube and TikTok, and intensified during the pandemic with live performance on pause. With her graceful, one-of-a-kind style — a blend of bhangra, Bollywood, hip-hop and giddha, another Punjabi folk dance — Toor embodies a coming-together of genres that has found an enthusiastic global audience.

A decade ago, if you searched for bhangra on YouTube, you’d find videos with rows of colorfully costumed, neatly coordinated dancers, lined up on the stages of college campuses and national bhangra competitions. These young dancers, many of them first- and second-generation South Asians performing on competitive university teams, popularized the dance form, giving some of their fellow Americans a passing familiarity with bhangra.

Today, artists like Toor, 31, are changing the way that bhangra and other Indian dance genres are seen, creating dances meant to be consumed online in productions that resemble professional music videos. Whereas team-based performances emphasize the beauty of group synchronization, videos made for YouTube can draw out an individual artist’s skill, her facial expressions, her choices of fashion and makeup. 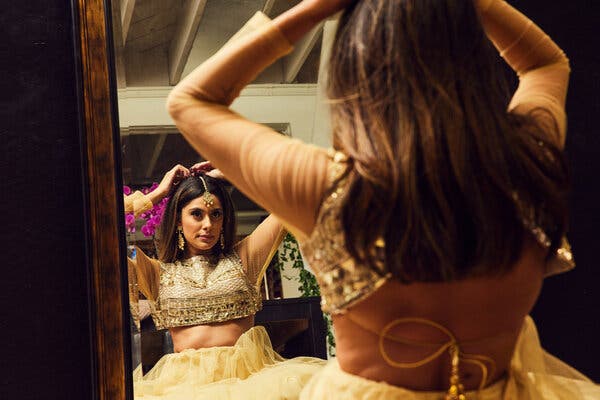 Toor’s blending of genres — bhangra, Bollywood, hip-hop and giddha — has found a global audience.Credit…Ryan Young for The New York Times

Toor has long helped define what it means to dance bhangra online. Her YouTube subscribers recently reached 1.25 million, and her videos regularly rack up hundreds of thousands (and sometimes millions) of views among fans in North America, India and beyond. “It is my stage,” she said, and her potential reach is unlimited.

“Her nakhra is probably one of the best nakhras I’ve seen in a dancer — it’s so flawless,” Chahal said, using the Punjabi word that describes a dancer’s individual flair, enjoyment and connection with the audience.

Traditionally a male dance, though now performed by dancers of all genders, bhangra is characterized by fast-paced, ecstatic movements. Arms and legs are thrown high in the air, making dancers appear big and buoyant.

“It’s a very in-your-face dance,” said Omer Mirza, a founder of the acclaimed Bay Area bhangra team Bhangra Empire. “It’s kind of nonstop high energy, and that’s what makes it so appealing to everybody.”

And yet “there’s an element of grace at the same time,” added Puneet Mirza, also a founder of Bhangra Empire and Omer Mirza’s wife.

“Bhangra is life,” Puneet Mirza continued. People in Punjab “are always doing bhangra for any festival, any happy occasion.” It can also be a medium for political dissent: Bhangra dancers and musicians around the world have been outspoken in support of the millions of Indian farmers and workers, many of them Punjabi, who have been protesting the country’s agricultural reforms that began last year.

The genre descended from folk dance forms in Punjab, a region of northern India and Pakistan. “These dances were created largely, though not exclusively, by farmers,” said Rajinder Dudrah, a professor of cultural studies and creative industries at Birmingham City University in England. “To entertain themselves and partly also to break up the monotony of the day, they would sing songs or couplets to each other, clap along, and then also they would replicate some of the moves of, for instance, dropping seeds on the land with one hand and raising the sickle in another” — movements that also underpin present-day bhangra choreography. For faslaan (“crops”), dancers gently sway like wheat blowing in the wind. For mor chaal (“peacock walk”), they fan out their arms like a peacock displaying his feathers.

Toor grew up dancing primarily bhangra, a genre she calls “very masculine” and not very lyrical. Her performances stand out for their light touch: On her, a move like mor chaal looks slightly more fluid, slightly less choppy than on other dancers.

Image“Her nakhra is probably one of the best nakhras I’ve seen in a dancer — it’s so flawless,” Preet Chahal said of Toor.Credit…Ryan Young for The New York Times

Contemporary bhangra emerged in the diaspora. “Britain was the cultural center for bhangra, particularly in the ’80s and ’90s,” Dudrah said. “It very much became a fusion-based music, which then started to draw on the experiences, stories, and identities” of South Asians in North America, Britain and elsewhere. Artists combined Punjabi lyrics and South Asian instruments, particularly the dhol drum and the single-string tumbi, with pop, hip-hop, reggae and other genres.

The new bhangra music expressed a sense of Punjabi cultural pride while also creating dialogue with the wider culture — Jay-Z famously remixed the track “Mundian to Bach Ke,” or “Beware of the Boys,” by the British-Indian artist Panjabi MC. It also reshaped the Indian music industry: “That music then drew the attention of people back in India, not just in the Punjab, but also in Bollywood,” Dudrah said. “They also have crafted and created their own Indianized, Indian contemporary bhangra.”

The cross-pollination of bhangra and “filmi” Bollywood dance — not a single genre, but a fusion of many — is evident throughout Toor’s choreography. She was always drawn, she said, to soft, expressive movements, and grew up imitating the dances of Madhuri Dixit, 54, a Bollywood film star who was trained in the north Indian classical dance genre kathak.

ImageToor infuses bhangra, a genre she calls “very masculine” and not very lyrical, with a light touch and more fluidity.Credit…Ryan Young for The New York Times

Toor took some informal dance lessons as a child — “we used to get in a garage,” she said, “a mom used to teach us” — but she’s mainly self-taught. She became popular on the internet in the early 2010s, when she performed with a partner, Naina Batra (now a successful YouTuber in her own right). The pair delighted audiences in person and online with their inventive Bollywood routines, featured at competitions otherwise dominated by bhangra.

With the success of her YouTube channel, Toor decided in 2016 to drop out of college, where she was studying nursing, to pursue dance. “It was a pretty quick decision,” she said. Around that time, she dance-battled herself in the viral hit “Bhangra vs. Bollywood,” set to the song “Wonderland.”

Toor has become noted for her versatility. She can go from a vigorous bhangra routine to a delicate, romantic Bollywood oldies mash-up with echoes of kathak. “She’s like a sponge,” said the dancer and choreographer Saffatt Al-Mansoor, who collaborated with her on a recent hip-hop routine set to the English-Punjabi R&B track “Hor Labna” (or “To Find Someone Else”). “Everything just looks good on her. She’s a choreographer’s dream.”

A staple of Toor’s channel is the comparison video, in which she sets different styles against each other, showing off her range. In the flirty “Aankh Marey” (“Wink”), she slides and hip-shakes through the new and old versions of a popular Bollywood song: pleather leggings and a crop top in one, lehenga and ’90s dance moves in the other. In “Track Suit,” Toor presents a modern twist on giddha, traditionally a women’s dance that is, Dudrah said, “the female counterpart to bhangra.” She and her backup dancers showcase giddha’s characteristic clapping and foot stomps, lighter and more contained than those of bhangra but no less energetic. With a competitive air, Preet Chahal and two men dancers in tracksuits take over the scene, breezing through a jaunty bhangra routine to the same song.

“If you think about giddha through the body of someone like Manpreet Toor, who’s in a North American space, you can then start to see that it’s not just clapping and dancing the female body in the conventional, traditional sense,” Dudrah said. “It’s also layered through new choreography.”

Because their dances are set to music that is owned by record companies, YouTubers like Toor usually can’t make money from their videos. “If it’s by a big label, which is most of the time like Sony or T-Series, we have to give up the rights, so we don’t monetize,” she said. Dancers have to find other ways of making a living. Unlike a genre like ballet, Puneet Mirza said, in which dancers can aspire to perform professionally, bhangra doesn’t have a clear career path. “If you study bhangra, where do you go?”

For many dancers, including Toor, the answer is to teach classes. Toor has often recruited her students as backup dancers for her YouTube channel, including for her most popular video, “Laung Laachi” (“Clove and Cardamom”), with more than 32 million views (the girls in that dance “have been looking up to her since they were little kids,” Chahal said).

Bhangra Empire, true to its name, has built a dance class business that Puneet and Omer Mirza estimate has reached 5,000 students in the Bay Area and other cities. “When we first started, we looked at ourselves as performers, but now we kind of look at ourselves more as teachers trying to teach the next generation,” Omer Mirza said.

Toor also has bigger ambitions: She has headlined music videos for artists like the Punjabi singer Garry Sandhu and the Britain-based PBN (Punjabi by Nature). She recently traveled to Mexico to film a music video with Harshdeep Kaur, a well-known Bollywood singer, and the British artist Ezu.

Her YouTube career has found her a place in the Punjabi entertainment industry, even from halfway around the world. Eventually, she wants to choreograph for Punjabi movies. “Slowly but surely, I will be getting there,” she said.